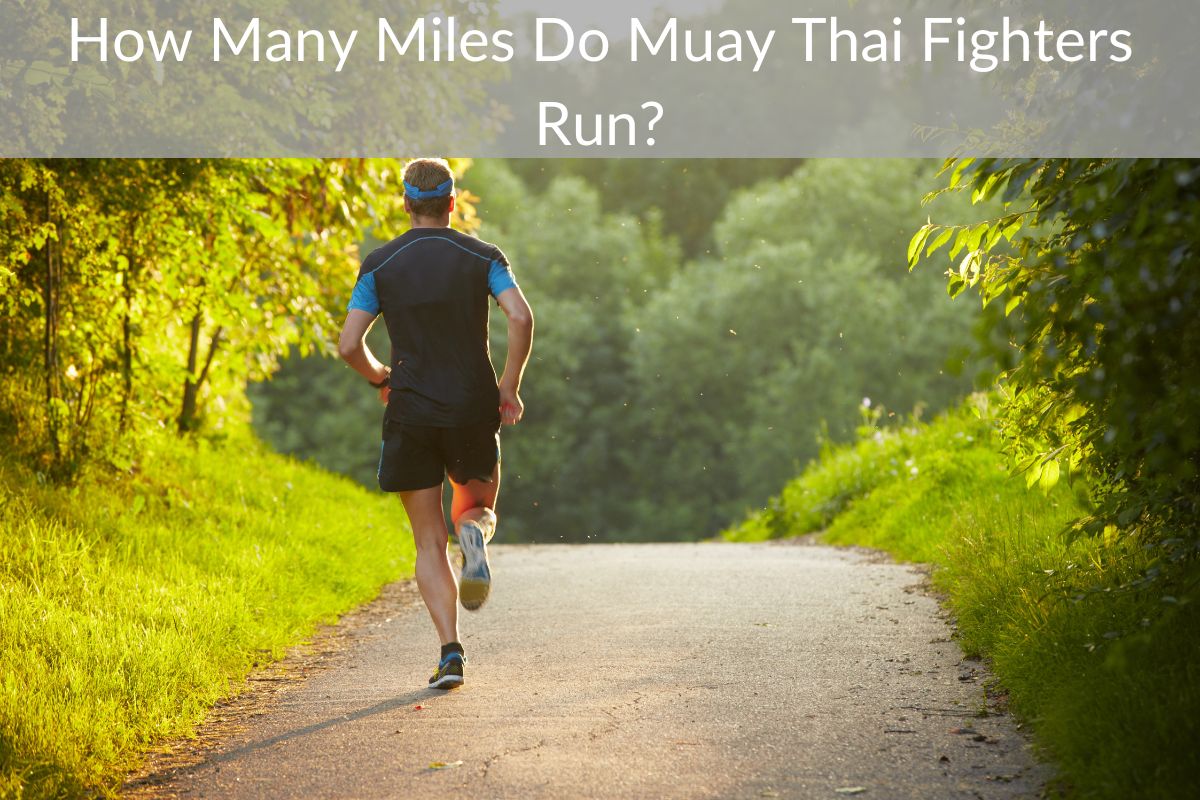 While many Thai trainers say running is not the best choice for MMA training, it is extremely effective in building a solid aerobic base and burning tons of calories. It is also a great way to build mental toughness, as running is a grueling and challenging workout.

Generally, a fighter should run three miles five to six times per week. However, some fighters run even more often, up to eight miles a day.

A muay Thai fighter must train on a daily basis. Running is one of the most essential training exercises, as it burns calories and improves general fitness. The Thai sport emphasizes long runs, which help build strong legs and improve overall fitness. The consistency of the running sessions is directly related to the fighter’s training and performance in the ring. Here are some reasons why running is essential for muay Thai fighters.

Running develops a strong cardiovascular system. It also improves leg strength, as it constantly pounds the pavement. The stronger the shin bones, the better, and running improves both. A muay Thai fighter needs plenty of stamina to stay in top condition. By training regularly, the athlete will get more energy and be more alert during his fights. But running is not enough to maintain a high level of fitness.

Muay Thai fighters train twice daily. In addition to running, they perform light stretches and plyometric warm-ups to get their bodies ready for the workout. Those who train three times per day can expect to have their body in top condition. The training sessions are divided into two categories: aerobic conditioning and anaerobic conditioning. Both of these are important, but running alone is not enough for muay Thai fighters.

Although running is not easy, it is necessary for Muay Thai fighters. Overstriding can cause injuries, as it causes the feet to land on the heels. Landing on the forefeet relieves pressure on the knees and ankles. Proper running shoes help Muay Thai practitioners land softly on their forefeets and minimize injuries. If you’re serious about training in Muay Thai, running is mandatory.

The cardio component of any workout is crucial in any combat sport. Without good cardiovascular fitness, a fighter will not be able to win. Even having superior technique won’t help if your opponent is better on the cardio side of the match. Whether you train for three days a week or spend an entire weekend doing a variety of exercises, a strong cardio routine is essential for muay thai fighters.

Developing an aerobic base

A good training routine will include intervals of moderate activity followed by a burst of high intensity activity. A minute of rest will be provided before the fighter heads back out to repeat the workout. This training will help build a fighter’s Aerobic base and provide them with both explosive Anaerobic energy and steady Anaerobic endurance. For this reason, most fighters will engage in interval training, a training program where they will shift between high-intensity activity and moderate-intensity exercise.

To develop an aerobic base for muay thai fighters, it is necessary to understand the physiology of fighting. For example, a standard mma fight consists of three five-minute rounds, while a BJJ black belt may compete in a series of 10-minute matches. Each fighting style has its own unique demands, but most require a combination of high intensity and aerobic base.

The results from the studies revealed that Thai fighters have higher VO2max than their western counterparts. A lower VO2max is indicative of a low conditioning level. In another study, fighters were measured during real Muay Thai competition to determine their cardiovascular conditioning. While their VO2maxes were lower than those of the MMA fighters, they showed higher heart rates than those of the previous study.

In addition to establishing an aerobic base for muay thai, a strong roadwork routine is crucial. This will build up muscle strength and speed while reducing the risk of bone fracture. A strong shinbone can help a fighter strike his opponent with a kick that can hit the tibia bone. By building a strong bone, a Muay thai fighter has a greater chance of winning a fight.

There are a few ways to develop a disciplined mind for muay thai fighters. Developing confidence is one. Confidence is the belief that one is able to achieve a goal. Confidence is one attribute that children pick up when they start training Muay Thai. Confidence develops with each obstacle overcome on the mat. Confidence also builds with longer workouts and higher performance in general.

A complete fighter is one who masters all fighting modes, both physical and emotional. A complete fighter balances these three aspects to win. For example, a fighter must master defensive moves that rely on speed. This requires the ability to practice these movements over again. As a result, practicing these defensive movements regularly will build your speed and agility. In muay thai, repetition is a vital aspect.

Another way to develop a disciplined mind is to train in another combat sport. MMA and boxing are challenging, but they can also build self-discipline. Self-humbling is an essential component of combat sports, but training in martial arts requires the same self-control. In both boxing and MMA, self-control is key to success. When you learn this discipline in one sport, you will be well equipped to face any challenges that come your way.

Another method for developing self-discipline is learning to meditate. Meditation helps calm the mind. Meditation improves concentration. By practicing meditation, you can focus on a goal. You can also try doing yoga or doing some meditation if you find it beneficial. A daily practice of these techniques can help you develop a disciplined mind. In addition to being physically fit, practicing martial arts will improve your mental discipline.

A morning run will help you prepare for sparring. A short run, usually three to five miles, will build up your cardio and loosen you up for training. You can also try running sprints in fight camp to increase your maximum oxygen consumption, or VO2 Max. Boosting your VO2 Max allows you to fight at your optimal pace. With practice, you’ll be able to develop muscle memory, which will improve your movement and technique inside the Circle.

Developing a strong cardio base

Developing a strong cardiovascular base is vital for Muay Thai fighters. MMA fighters typically do 10 sets of 100m sprints once or twice a week. These workouts develop power and explosiveness, and they allow fighters to end fights quickly. While cardio is vital, it should be done separately from strength training. While it may not be obvious, the two exercises are interrelated.

As in any other combat sport, having a strong cardio base is critical. Even if you’re a strong martial artist with a great arsenal of skills, if you lack cardiovascular endurance, you’ll likely lose. It doesn’t matter how good your technique is if your opponent has superior cardio. Developing a solid cardio base for Muay Thai fighters is important for improving stamina and energy levels.

Developing a strong cardio base is essential for a fighter to maintain their stamina and combat ability. To do this, fighters must perform a vigorous workout routine that includes daily pad work, running and aerobics. Even a 30 minute jog a day will help you develop an impressive cardiovascular base. Developing a strong cardio base for muay Thai fighters should be part of your training routine.

During the distance phase, the athletes engage in single attacks and counterattacks. Their heart rates remained above the lactate threshold throughout the round, and averaged 168 BPM. The Thai boxers were higher than those in a previous study. Muay Thai demands both high levels of aerobic and anaerobic contributions. This is why many Thai boxers have high VO2 levels. The fast combinations in the sport require both high aerobic and anaerobic efforts.