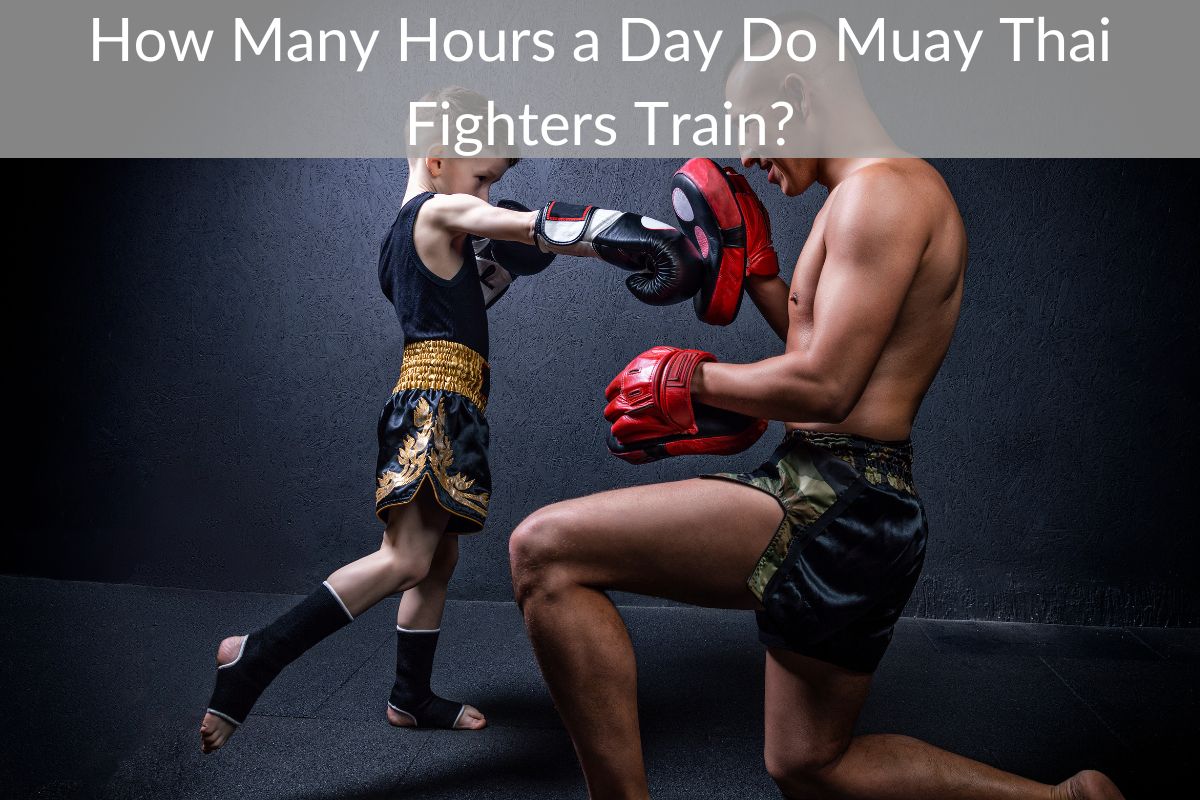 There are several factors to consider when determining how long Muay Thai fighters train. One of the main factors is technique. While focusing on one technique can improve technique and overall conditioning, it’s not sufficient to focus on the same technique three times a week.

To maximize your potential for success, you should aim to train four days a week or more. Countless hours are invested by trainers to produce world-class Muay Thai fighters.

Muay Thai fighters must spend countless hours conditioning their bodies. Not only are they mentally tough, but they must also be physically fit. Typical training sessions last two to three hours and require athletes to master a wide variety of athletic attributes. In addition to rigorous daily workouts, fighters typically train in extreme heat and humidity. Their training routine includes three to five hours of training per day, which is broken up into several training sessions, each lasting two to three hours.

Real Thai boxing gyms typically have two three-hour sessions a day. These sessions are conducted 6 days a week. Training in Thailand takes time, so a mere three-week stint won’t make you an expert. Still, this sport can be enjoyed by a total novice, someone who practices as a hobby or keeps fit, or an experienced fighter at the top of their game. Despite its grueling schedule, muaythai training in Thailand is not for the faint of heart.

Some competitors prefer to stick to a strict training schedule, while others are free to vary their training schedule. During sparring, fighters practice specific techniques. By visualizing themselves in action against their rival, they practice specific techniques. During sparring, fighters engage in series of punches, knees, elbows, and parries. The sparring session may last anywhere from three to five rounds. During sparring, the athlete works on maintaining their optimal pace and technique. By sparring with opponents of similar skills, the fighters improve their muscle memory and range. They can better control their movements and attack their opponents.

Several factors will affect how many hours Thai fighters train each day. For instance, the number of days a fighter has to spend training varies greatly. A fighter should consider whether he or she is training for competition, a big fight, or a big tournament. If they are just starting out, three or four days a week may be sufficient to develop their techniques. The amount of time spent on training can also depend on their busy schedule.

Countless hours are invested by trainers

Unlike many other martial arts, Thai fighting is not an easy sport. It involves countless hours of training and a commitment to discipline. As a result, Thai fighters tend to lose many of the important athletic attributes. For example, Thai fighters usually do not have proper Strength & Conditioning training. Instead, they do a lot of bag work and pad work. But there are also some things you should avoid while training Thai.

The Thai style of training focuses on developing the core athletic profile areas, including endurance, strength, and power. These areas are often trained separately, but together form the overall athletic profile. While some fighters focus on building their endurance, most are missing out on developing their Alactic energy system, which is necessary for true strength. While endurance training is a critical component of Thai style training, so is power and speed training.

While many of the Thai boxers train six days a week, they still have to attend two three-hour sessions each day. Real Thai boxing gyms will run two three-hour sessions a day. This schedule allows them to focus on other aspects of their lives. The training is also crucial for their families’ survival, as the gyms need to pay their fighters to compete. The fee can be difficult to understand for non-Thai people, but it is vital to Thai boxers’ livelihood.

The training regimens of the boys in Thailand are not unlike that of adult fighters. They begin their training at a very young age, and they may start wearing gloves or doing padwork with trainers at six years of age. By the time they are eight, many of them are already fighting full contact at local events. When they reach the age of fifteen, they can compete in official Muay Thai competitions. Parents want their children to excel in this sport and win major tournaments.

The training regimen for muay Thai in Thailand depends on the level of competition a fighter desires. In Thailand, fighters train for at least four weeks. The emphasis of training is technical development. While Thai boxers generally focus on technical development, foreign fighters may have dietary restrictions and not eat Western-style foods. It is also common for them to eat together.

The question is, how many hours a day do Thai fighters work out in Thailand? This is easier said than done. Many fighters train in Thailand more often and more intensely than they do at home. It may be tempting to stay home when the gym is open, but it’s important to remember that you need to train to be ready for the ring. If you’re not a fan of weightlifting, you can always start slowly and build up to the grueling training schedule.

The most important thing to note is that sparring with partners makes the afternoon session much harder. While you don’t need to spar with a partner every day, it’s good to spar with different angles, throw longer combos, and work on a few different exercises at the same time. You can make sparring sessions fun and playful or tough and intense. If you’re a professional fighter, you should always work out at least three hours a day. If you can afford it, you can hire a personal trainer to help you get in shape.

Ideally, you’d train three to five hours per day. But for most fighters, that’s not enough. Most trainers suggest a minimum of eight hours. But the truth is that it’s much more than that. If you have the time, you should make it up with extra workouts, too. And don’t forget about sparring! A lot of Thai fighters use sparring as a way to practice their techniques and build grit.

While you can’t do the same thing as a professional, you can still benefit from muay thai training. You can work out in your own home by doing shadow boxing, hitting pads, or even training in the gym with a partner. Just don’t forget to add in some cardio as well. You can also train in the gym a couple of times a week. This won’t hurt you if you’re a professional fighter.

Preparing for a fight

The best way to understand how long a Muay Thai fighter needs to train before a fight is to look at a typical training regimen. The traditional Thai fighter will train three to five hours a day, but some athletes prefer to train at a set schedule. Most traditional Thai fighters begin their training sessions with a long run on pavement. This type of exercise helps build stamina and aerobic endurance, as it uses oxygen to keep moving. Additionally, long distance running builds muscle memory and helps fighters maintain a constant pace.

Most good gyms have a sparring session dedicated to that purpose. While sparring with partners is not necessary, it can be helpful. Ideally, a fighter will train with a partner twice a week. Not only should a fighter spar with a partner, but he should also train with a bag or pads for maximum conditioning. Training should be split up into two parts, with strength and conditioning sessions occurring on separate days.

Muay Thai techniques are simple and fundamental, but they must be learned and practiced before a fight. Strength and cardio training are equally important. The trainers of Muay Thai fighters are known as Kru, which means teacher. Students must follow the advice of their Kru, who usually has extensive experience in the sport. Even fighters with a wealth of titles will take advice from their Kru.

The number of hours a Muay Thai fighters train before a competition depends on their goals. If you’re aiming for total muscle and physique, then two to three sessions a week will suffice. If you have a full-time job, however, three training sessions a week will be enough. However, if you have a busy schedule, a half or three-day training session should be sufficient.